I finally departed Virginia for the trek west.  Left about 1300 on 13 October 2019 for the final destination of Denver, CO. I hate driving for hours so I departed a day early to cut the travel time in half.
DAY 1, Yorktown to Lewisburg:  The first actual target was the National Museum of the United States Air Force, but I stopped about four hours short - in Lewisburg WV - which allowed me to hit a couple of events before I left. 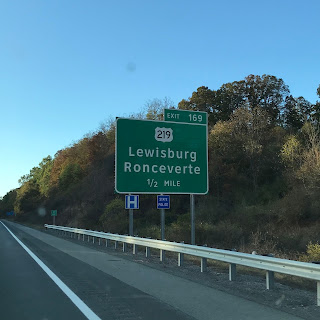 DAY 2, Lewisburg to Dayton:  A convenient thing about stopping in Lewisburg was "The Lost World Caverns" were right next to it. Since I wanted a full day at the Air Force Museum, I could afford to take a visit since I only had a five-six hour drive in front of me. 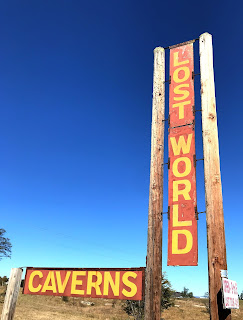 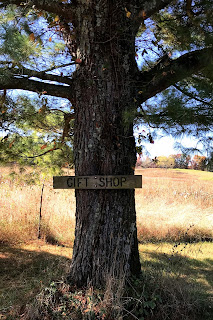 The sign marking the turn...which looked like a road to a house.  And then I came across the GIFT SHOP which was a real surprise. I've never been to a gift shop in a tree...it was like Narnia. Average gifts for sale but excellent location. 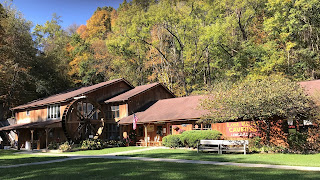 As the road continued to begin to wonder if there's anything actually there. The "Lost World" caverns felt about right, but then as you crest the last hill, this cool little cabin (and actual residence) is waiting for you...waterwheel and all!  And to my surprise, this was also where the actual gift shop was located. You enter the cave (cavern) through a tunnel that is IN this building.  Cool idea. 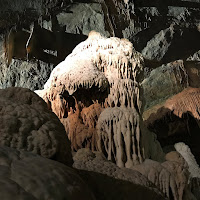 There is no specific commentary to these and the following pics...just shots of the amazing formations created over so many years.  I did learn that it's stalagmites and stalactites.  For my entire life I thought it was a "g" in both. It's not.  But lest you forget...when the "mites" go up, the "tights" come down. Or funny enough, while in the cavern, I heard a grandma describe it as the "mites" are like mountains and the "tights" hold tight to the ceiling.  I guess that's more G-rated. 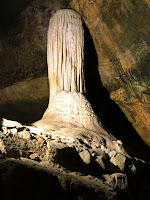 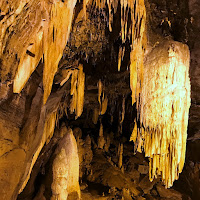 I don't show it here, but there was a "look up" spot. It's a shot straight up to daylight. In fact, it's how the found the cavern. It's where the farmer (the land owner) used to dump dead cows and sheep. It's since been protected and covered with a grate. Another cool thing is it's still how bats get in and out.

Aside from the amazing formations and dramatic lighting found in caves, one of my favorite things is they're always the same temperature. Always! This particular cavern is always 52 degrees. You can see your breath with the right lighting. If you get a chance, I recommend visiting. It's only about 12 dollars. I wouldn't necessarily drive to it but if you're in the area and/or on I-64, I'd stop.

Nothing really of note upon the arrival to Dayton.  If you want lodging, it's Area A.  I had pick A or B as I was on the interstate.  Chose A and was lucky.  I do have to show the room, however, as it was  a bit "cramped". 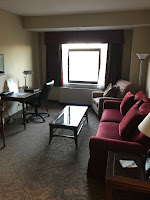 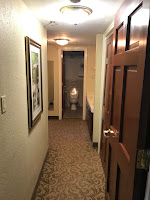 Living room on the left, the hallway on the right and TWO separate
sleeping rooms down the hall to the left.

DAY 2, Dayton to Crawfordsville:
Again, I had only about a four-hour drive to Crawfordsville which gave me time to see the National Museum of the United States Air Force near Wright-Patterson Air Force Base / Dayton, OH.  As mentioned, this museum is the only reason I went "up" then "over" towards Denver.  So get ready for some pics!  In roughly the order I viewed them and with limited commentary to keep the post from running on... 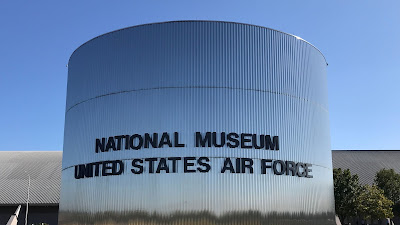 Welcome to the Museum! 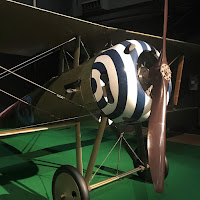 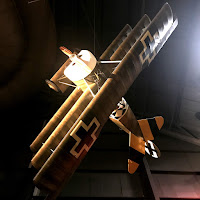 Curtiss P-6E Hawk and Boeing P-26A Peashooter
The paint jobs on both of these is amazing and the Hawk kind of looked like a Hawk to me. 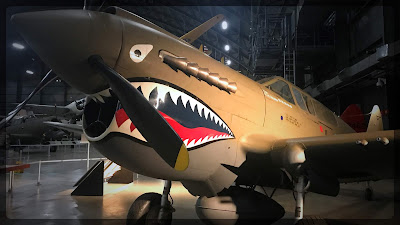 A personal favorite (and always will be), the Curtiss P-40 Warhawk. This is an E model.  I love its lines, its intake, and how it looks like it's literally chewing up the air.  Also, I always go the feeling it plays second fiddle to the Mustang, and I'm all about supporting an underdog. 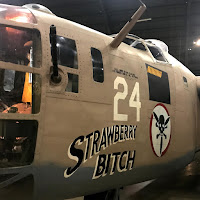 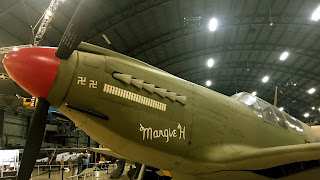 It's hard to argue with a bomber called "Strawberry Bitch" as is this Consolidated B-24D Liberator. This North American A-36A Mustang is the first version of the Mustang for the Army Air Forces and you can see its resemblance to the P-51.  I snapped its pic because it's a good looking airplane and I wasn't tracking the P-51's predecessor.  It's also nicknamed "Apache" or "Invader".

German Messerschmitt Bf 109G-10 and  Mikoyan Gurevich MiG-21 Fishbed.
Had to put these two together as they're both incredibly iconic as "the bad guy". 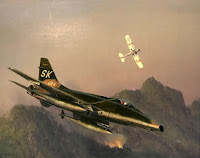 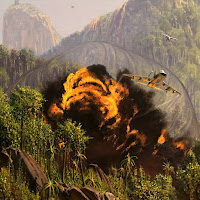 Two excellent paintings by Wilson Hurley. On the left, "Working a Pair of "TACOs" North of Checkpoint Pecker" and on the right, "Close Support, Troops in Contact". Hurley became a very renown landscape artist and painted these from his actual experiences.  He flew over 150 close air support missions in the Cessna O-1 Bird Dog (shown below).  Impressive. 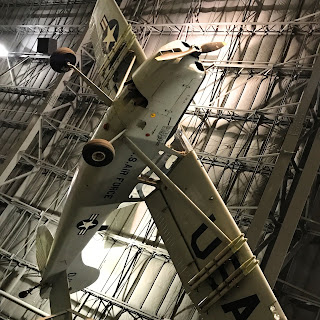 Two more close air support birds; the Douglas A-1E Skyraider and the North American F-100 Super Sabre.  The "Hun" has always been a favorite of mine, and the Skyraider not only has a cool name, it's a piston engine that flew a lot of combat in a jet age. 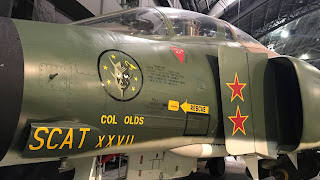 In the "Thud" vs "Rhino" debate, I have to go with the Thud. Probably because it's a single-engine, single-tail legend. I didn't take a picture of the Thud because I couldn't get an angle I liked.  This particular F-4 was certainly worthy of a pic...it's "SCAT XXVII" which was the last one flown by Robin Olds.  I'd just been to a gala a week earlier and heard his daughter speak. She does an excellent job keeping his story alive and sharing history. For the record, Thud and Rhino are street names. Their given names are Thunderchief and Phantom II.  Both legends in their own right.

A long-time favorite of mine, the North American F-86 Sabre.  Kind of a love-at-first-sight thing for me. When I took the picture of the one on the left, I couldn't place it exactly, but something was off.  Then I looked at the sign - it is an F-86A.  I'm not sure I could list the differences, but you can tell it's not a later model. The right picture is an F-86D and I don't particularly like their noses, but I took the picture because it had a great logo/mascot down it's sides. It was the logo of the 97th Fighter Interceptor Squadron, which is now the 97th Flying Training Squadron - the Devil Cats.

Two Twin-Mustangs! The North American F-82 Twin Mustang. I posted these for a few reasons.  They're pretty rare, these two are beautiful and earlier this year, I saw the one operational XP-82 (44-83887) at Oshkosh. There are only five left in the world, the two above, one on static display at Lackland, one being restored, and the one at Oshkosh.

These two aircraft have always had my attention because they simply scream "speed". On the left is the Convair B-58 Hustler and the North American XB-70 Valkyrie. Neither were very successful (2 Valkyries and 116 Hustlers were built), but they both look so cool. 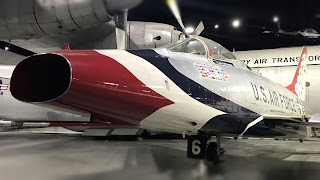 Two more Hun shots - just cause.  This one painted as a Thunderbird. 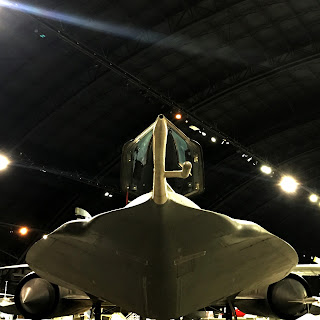 The Blackbird - the legend.  The Lockheed SR-71 Blackbird or Habu. An interesting note...the story exists that President Johnson misspoke the designation (was RS-71) in a press conference.  In reality, CSAF LeMay asked the President to change it prior to the speech. 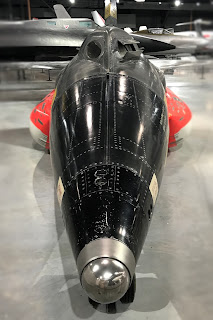 I like X-Planes.  One of these technically isn't an X-Plane but still a concept plane. From left to right, the North American X-15 (mach 6.70 and to the edge of space), the Douglas X-3 Stiletto (only one built), and the North American F-107A (based on the Super Sabre with intakes on top). If nothing else, you have to respect the things we've tried in order to improve aviation.

Go to this museum if you can!  It's free!

DAY 3, Crawfordsville to Nebraska:
As you might guess...pretty uneventful. Just lots of driving. I even looked around once I got there to see if I missed anything. Saw corn and that's about it. 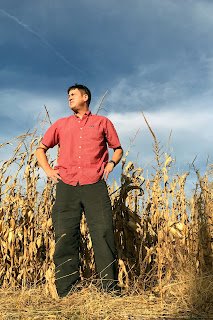