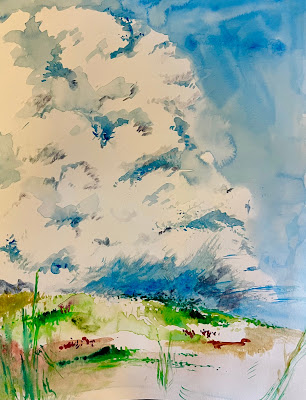 I was trying to make the clouds similar to Bridge Life. I liked those clouds. These were okay, but they didn't 'pop' as much as I was hoping they would. Regardless of outcome, it was great to throw some watercolors around again!

I needed a night stand - found one at arc thrift.  Refinished it an added my own twist on the handles. It kind of loses the point of a restoration/refinish when you forget to take "before" pictures. Someday I'll learn. 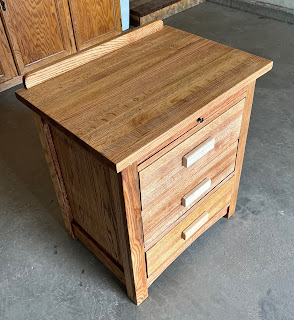 Two gentlemen flew all the way from Connecticut to do some mountain flying in their Aerobatic Bonanza. Their home airport is actually grass - Candlelight (11N). We did some academics the day before and were gambling on one day for flying. The weather cooperated wonderfully! They flew a lot together so made a perfect crew. It was a great day! 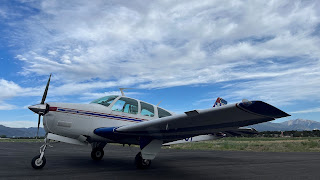 A hot day but surprisingly cool at Salida (KANK). 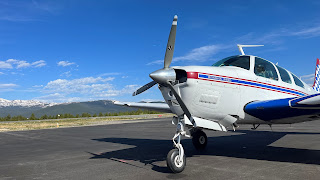 We swapped the pilot flying and picked up a couple of certificates at Leadville (KLXV). 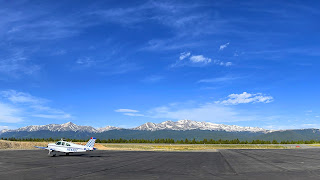 A panoramic shot at Leadville.

I was lucky enough to fly a Top Cup to Arizona with a great co-pilot, Matt. The epic sunrise pics were taken by him as we flew out of KAFF to KAEG. We thought it was going to be a rough ride (turbulence), but it turned out to be a great ride. 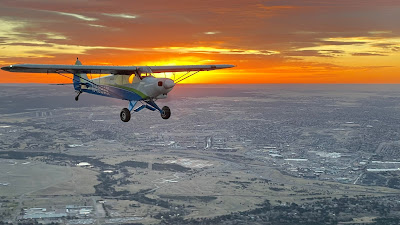 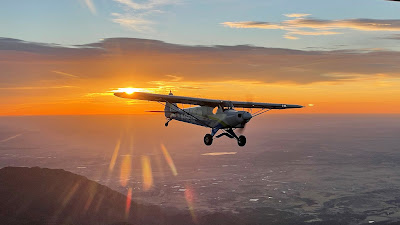 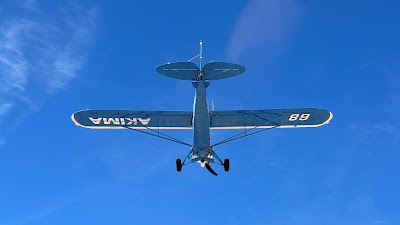 This pic is after departing KAEG and on our way to Marana, AZ. Personally, I think our Top Cups are fantastic airplanes. They're only about four years old.  Matt took this pic and it turned out perfect.
Let's not forget, there is no way we could make it from CO to AZ in less than seven hours without airpower. And this airpower is about as slow as airpower can go. Nonetheless, airpower is incredible!

One of MPB's (Mary Poppin's Bag) handles was on the verge of breaking.  But I just received a late Christmas present and voila!  Good as new! 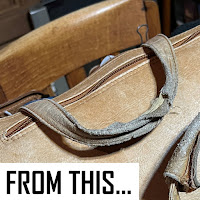 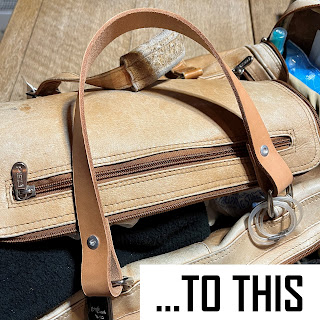 I've never flown a Cessna 414 - the "Chancellor", but if you're going to do it, it might as well be an impeccable one.  Randy asked me to fly with him to Oklahoma to pick up a cowboy and bring him back.  We accomplished the mission without incident and it was a great introduction to the 414. 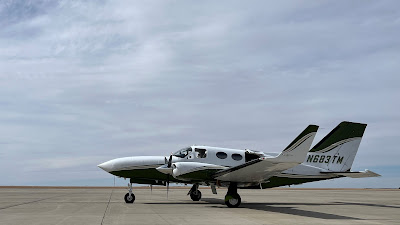 The flight was KFLY to KOUN, then KOUN to KWWR (for fuel and my second time there) and back to KFLY.  Passenger delivered, mission accomplished.
This plane is in great condition. It runs all Avidyne which is not only capable, but very intuitive.  The autopilot is fantastic and the ride is very smooth. This was only the second general aviation twin I've flow besides the Baron.  It was a great ride and an equally great opportunity!

I've been towing for the High Flights Soaring Club (HFSC) for about six months and it's been a great opportunity.  Flying their Super Cub at fist and a smooth transition to their Pawnee.  I'd never flow a Pawnee so it's been a priceless experience.

This makes it official. 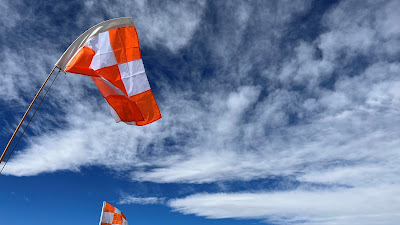 The sky was epic and new wind flags were added to the fleet - I thought it'd make a great picture. 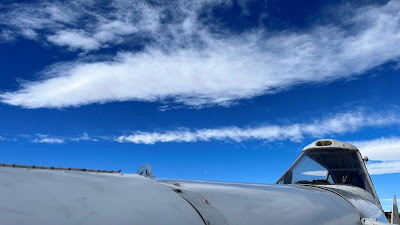 This is Zoey, our Pawnee.  They have ridiculously long noses.  It offers great visibility, but their slant is something you have to get used to.  The sky was epic and I thought this would make a good pic. This is looking back at Zoey's cockpit.  You can see how much nose she has.  You can't even see the prop.

What a great day to tow!

I ferried a Cessna 172E from KFLY to KJVY.  I learned that they weren't called Skyhawks yet, the Continental engine (O-300, 145 HP) was standard, and has a manual flap lever. The O-300 is a six cylinder engine which is nice as they 'rumble' instead of 'banging'. This was probably my worst picture-taking event. I literally took zero pictures as I was racing against the sun.

Because I'm sometimes horrible about taking pictures, this is the only pic I have of Yellowjacket. 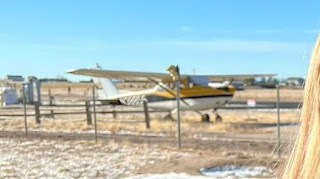 This is the route, KFLY to KRSL to KCOU to KJVY.
Or. Meadow Lake CO to Russell KS to Columbia MS to Jeffersonville IN.
885 miles, 9 hours. 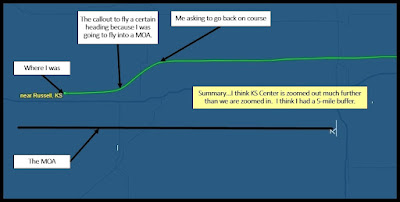 The only oddity I encountered was a callout from ATC that I was about to hit a MOA. As you can see above, I thought I was (and would remain) clear of the MOA.  I think Kansas City Center has less fidelity than I do, In the end, it was a great flight for endurance training and the mission was accomplished. 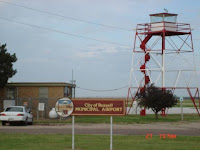 Shots of Russell (left) and Columbia. Of note, the fuel was very pricey at KCOU. I should've jumped over to KFTT (Elton Hensley Memorial) literally just 10 miles further. I normally don't use towered fields on ferry trips, so I thought I'd change it up a bit. You pay for what you want.
- FIG - 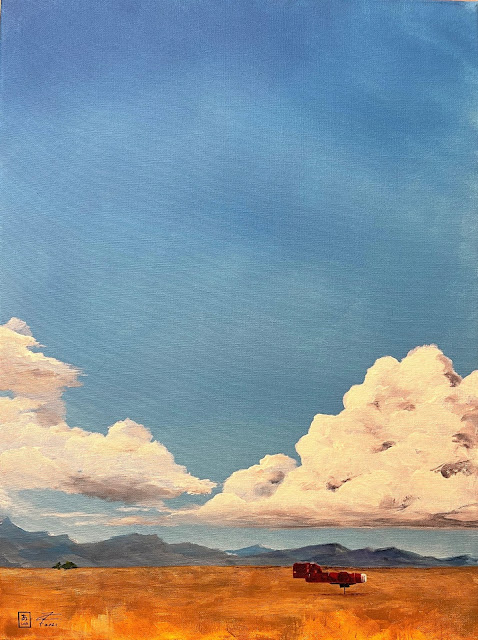 Sometimes the hardest thing and the right thing are the same.  The difficulty of decisions varies, but for the tough ones, solid guidance is priceless.

I often fly near this wind vane and regardless of its simplicity, it always gives good guidance.  Pointing north, I clearly know which way to go.  I thank God for His help and the help from those in my life.
The only sketch was this... 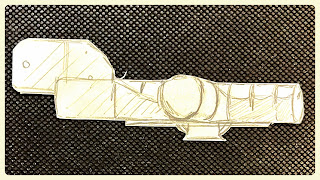 This is a cutout from the original piece of paper
This was my 30th card - which totally surprises me.  But at the same time, it always forces me to create at least one painting a year and reminds me of the amazing people in my life.
- mm -
by Musket at 22:51 No comments:

labels: acrylic, artwork, aviation, cards, colorado, custom, nature, painting
Older Posts Home
Subscribe to: Posts (Atom)
Welcome to my collection of things I've seen, places I've visited, items of interest, a collection of my art and that of others. Content from musketmedia.com is now here. Enjoy the site - I hope you're inspired to create what you've always wanted. Kandinsky, Wassily W.
Wassily Kandinsky was a Russian painter and art theorist. Kandinsky is generally credited as one of the pioneers of abstraction in western art, possibly after Hilma af Klint.
Read more...
Info: Artist's Website