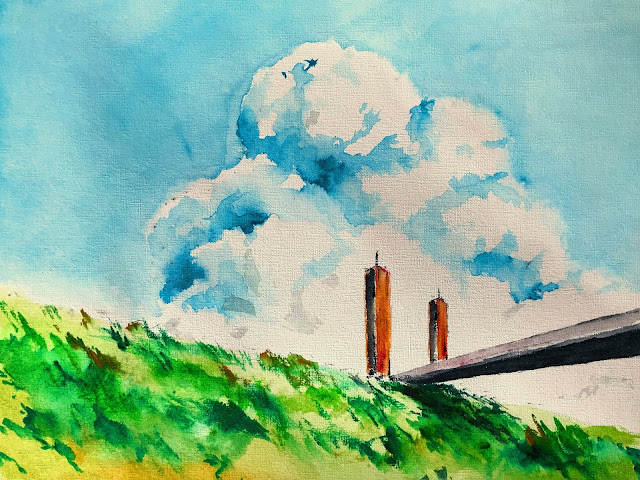 Written in the card...
I have been rather nomadic the last few months of my life and to keep it short, tell people I live under a bridge. So far, the bridges have looked a lot like hotels, but who knows what the next one will look like. Currently I'm trying to fly with United - which is quite an adventure. While being a nomad has its issues, in some ways it is quite liberating. It reminds me I need a lot less than I think I need.

The commentary in the card says it well.  However, I will comment on the process.  Below are three other bridges I painted prior to the final.  One is very United, one is rather Golden Gate-ish and the last rather 'in your face'.  It was the 'in your face' which I though best emphasized the bridge.  However it was kind of dark.  So I capitalized on the dominance of the bridge but wanted to go with a much happier sky (outlook).  And so we have the result.  Yes, it was a chance to practice watercolor clouds (which are a challenge for me), but also made a much more positive image.  The colors are much better in the final.  That sky/grass combination lets you image a day that is absolutely perfect for you.  For me, it's about 58-62 degrees and a bit windy.  But still perfect.

The fun of painting without explanation is viewers can imagine anything they'd like.  I purposely keep my descriptions vague and, funny enough, I had a dream about this painting.  A young girl was explaining the purpose of the spikes extending from the pillars.  I 'corrected' her and told her why they are there (in my mind).  It was actually more of a nightmare because it was exactly the wrong response.  I wanted her to believe why those spikes were there, and in two sentences I crushed her imagination.  Luckily, it was just a dream.  God was reminding me of graciousness. 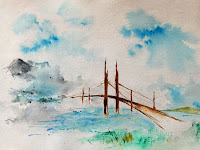 Left:  this was the first sketch which tried to show the architecture of the
United training center.  Epic failure.  Right, this was a random bridge.
I liked it, but it didn't really convey any of my emotions. 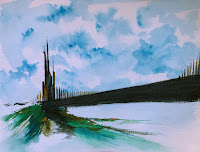 This was another fabricated bridge trying to emphasize the bridge more than it's surroundings.  I liked it and it was pretty close to being the final card.  But then I asked myself, "has the bridge life been so dark?"  Far from it, which is why I brightened up the entire scene but still made the bridge strong. The only thing I'd probably change is to move the bridge closer to the viewer (i.e., make it bigger). 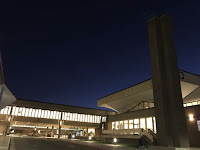 This is the United Training Center and I initially wanted to incorporated it into some kind of bridge.  I love the architecture and the blue sky looked great.  It's part of the old Stapleton Airport.


Return to the Cards or the Galleries