While there is happiness in successfully completing a checkride at United and becoming type rated in a Boeing 737, you quickly realize you're no longer in training and basically have no idea what is going on.  What's my schedule?  Where am I going to live?  How do I commute?  I had to chose between many options and since I was essentially homeless, I definitely had options.  Live in San Francisco (my hub), live in Denver (close to the airport), or live elsewhere?  Surprisingly, I went with 'elsewhere'.  The biggest factors where other friends and proximity to a general aviation airport. I think I could have established friends and airport access in any location, but I went with 'familiar'.  It really feels like being a lieutenant all over again.  I was casual status at the Academy after graduation and found an apartment.  Slept on the floor until my hips hurt.  I actually can't remember if I bought a bed, but I think it might be the bed which is in my guest room.  Not sure.
So, I did the same again.  Found an apartment, living sparse, and trying to figure out how to be in the right place and the right time for United's requirements.  It's kind of a lonely/obscure feeling.  There are things about it that I hate and love at the same time.
This is the relatively (completely) empty I currently occupy.  I think it's funny because it might be the last thing one would imagine a United pilot has as a life structure.  But I don't mind.  It's just a box and part of the adventure.  I fully trust God will show me the way. 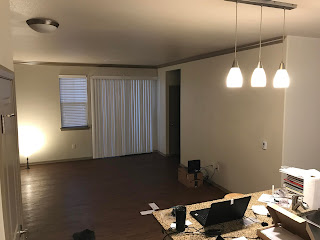 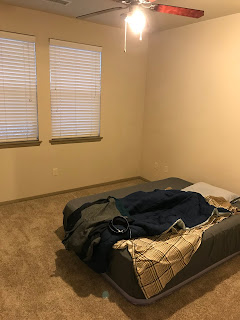 The living room (L) and the Master Bedroom.  Air mattress and 'all'. 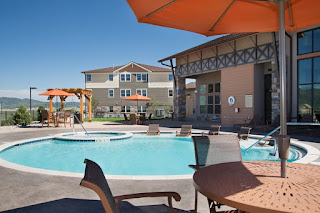 There is a pool with a good view of the mountains!

Thank you, Kate! That is a great outlook!