I don't know about you, but when you show up to an event which requires x, y and z, I always wonder how I'll be received.  Fortunately, United received everything they asked for and a name tag was waiting for me.  It's amazing how good a name tag can make you feel.  It's like they were waiting for you and you did all the administration correctly! 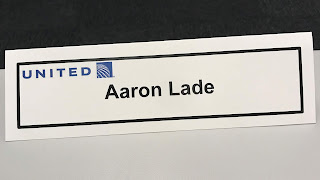 First things first...this was on the desk when we walked in.  It's a great feeling to see your name assigned to a seat.  It meant all the admin I had to do prior was apparently sufficient. 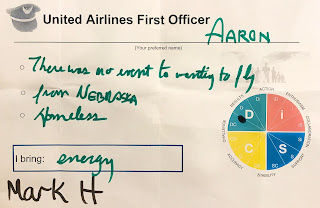 This was a sheet we filled out during indoctrination.  It placed us on the DiSC assessment.  It's not DISC because of copyright rules...so it's DiSC.  I was squarely in the "D" with an offshoot in the "I". That could be read that I am dominant with the ability to influence people.  We had to list three things about us and what we bring to the team.  The "from Nebraska" was because I was struggling for ideas but the first one, "There was no event to wanting to fly" makes me proud.  It's a bad sentence, but it was meant to convey I've wanted to fly inherently - with no external input.  If I'm honest, it was God and his clouds.  The "Mark H" was for Mark Hartney.  At the end of the course we had to add a name of someone who was a major influence.  Normally I use my brother, but in the flying world, Mark H is pretty amazing.  His B-52 exploded on takeoff, he's in a wheelchair, and he still instructs pilots to this day!  That's pretty impressive. 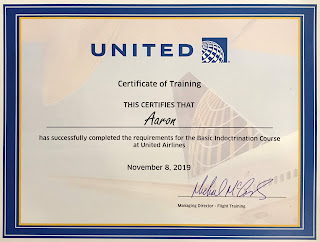 This was a certificate after our basic indoctrination.  They had a "Winging" ceremony, gave us wings, took our pictures and allowed us to invite guests.  United is top-notch professional and leaves me wanting nothing, but this was a bit strange to me.  They winged us before we conducted any training in the simulators.  In the end, I retracted the "bit strange" comment because it became very clear that United was going to make us succeed.  They hired us, they believed in us, and they would train us so we are ready.  That winging ceremony was basically a public announcement that they were committed to our success.  That's pretty awesome.


I wasn't going to go home for Christmas under the notion that I wouldn't be studying enough, but I am very happy I went home.  It was great to see my family and I had to trust the training prepared me for my checkride.  I had a cool vision when returning to Denver.  It was a sun setting below a layer of clouds peeled themselves just back from the horizon.  A sky is never predicable. 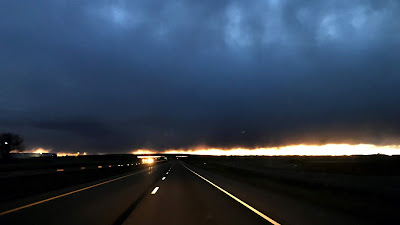 Mom always makes incredible food (and soups) for Christmas.  This was a shot of her bean soup which, while delicious, suffers a #3 standing below her chili and chicken soup.  It's just the way it is. 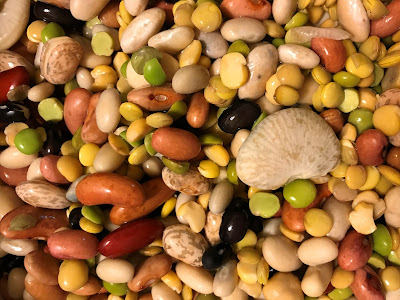 I played Clue with a classmate and her husband two days before my checkride and I'm glad I did.  It reminded me that one can only study so much - you're either ready or you're not.  And God has the outcome.  I drew this on the hotel napkin as we played.  It helped me 'let go' of the anxiety. 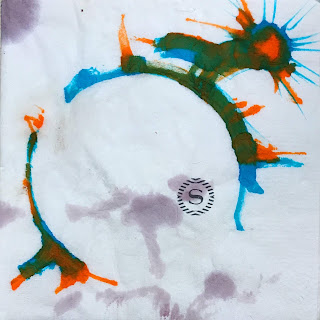 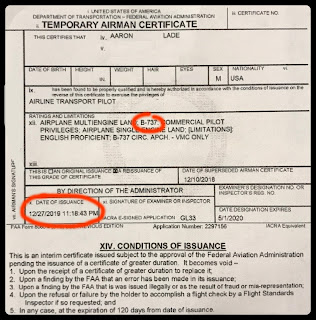 After about two months of training (ups and downs), I took my first checkride with United.  It was the culmination of our training, a no-kidding real event (FAA certified and approved), and the determination of whether or not you'd get a type rating in a Boeing 737.  I.e., if you don't pass, you have a black mark on your FAA record...forever.  You can survive, but it's ALWAYS there.  The pic above is the temp certificate you get.  I circled two things...the B-737 comment and the time.  11:18 PM.  The United Training Center is a machine!  Non stop.  And I didn't care one iota that it was almost midnight - because I passed!  Interestingly, it superseded my last rating almost a year to the day.  I took my ATP in December of 2018 and in 2019 was 737 type rated.  The funny thing about an ATP is it is "the highest level of aircraft pilot certificate".  That may be true, but it is hard to quantify a person and his/her skills. 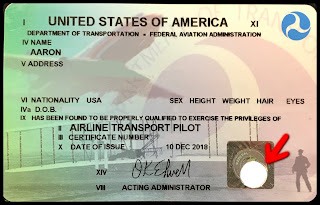 This is the certificate (from a year ago in Texas) that I had to surrender.  The red arrow shows the hologram violated by a hole punch.  It's a bit sad to surrender a certificate and have it destroyed, but when you're on receiving end of an positive checkride and/or an upgrade, you quickly surrender.

I thank God and my family for the undying support in both the endeavor and the training.  It was a great dose of humility and character-building.