Operation BUFFALO SPIRIT. 7.0 hours. 676 nautical miles. I ferried an aircraft from KFLY to KCPS after further inspections caused the buyer to refuse the aircraft.  After putting in a new starter, the airplane wouldn't start.  Classic GA (general aviation) stuff.  If it happens to you and it seems there's power, just rotate the prop and inch or two. That might realign the starter with the starter ring. 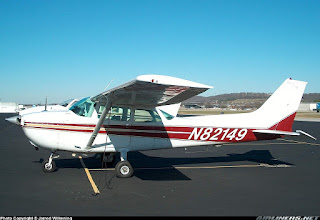 When I ferry, I normally divide the overall distance by whatever gives me about an hour short of total fuel. And if the aircraft is a C172, I walk out the door with 8 gal/hr burn and 90 knots ground speed.  It's easy math and it's almost always conservative.  So for this trip, I was able to do it with only one stop.  East to west often helps the ground speed.  The first leg was KFLY to K78 (Abilene Municipal Airport) in Kansas. When I dropped into Abilene one Kansas State Skyhawk was there but they left just in time to let me have the pattern to myself.  As I descended, I was opening all the windows and would have let the doors go if I could. It was all I could do to combat the humidity. Other than the humidity, it was a pretty straightforward leg. 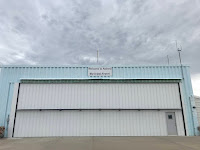 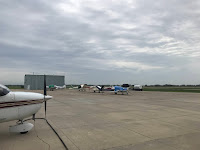 And this was Abilene...about nine hangars and, surprisingly, a nice array of aircraft on the ramp. The FBO was a little space on the right corner of the hangar above (left). I love this about GA.  The door was open, the bathrooms worked, there was water and snacks (with the honesty tip jar), and a sign in book.  There were also instructions on using the courtesy car. You can't find this level of support based completely on honesty in any other industry I can think of.  Love it!

The second leg, K78 to KCPS, was a bit more eventful than the first leg. You can see I diverted north around a cell of thunderstorms. I really wanted to go south (based on visuals) and as you can see, it would have worked out wonderfully. The only reason I went north was because another Skyhawk in front of me also took the north route.  While it was beautiful (lost the videos for some unknown reason) it was also painful. Tracking around a thunderstorm is never someone's plan, but in a Skyhawk, it's like it's in slow motion. The last 50 miles were awesome. You can see there was another thunderstorm right over St Louis. Fortunately, there was just enough room to get to my destination. The air was like a rodeo. Planes were diverting all over the place and ATC was nice enough to ask "149 how are you doing out there?". I told her (with a laugh) that it was very challenging VFR.  SHe asked "to maintain VFR?", and I said, "no, it's the air". Then she gave me direct to KCPS. I love it when people act like a team. Landed about five minutes before the storm waylaid the airport.  Awesome!
A note about flight following. How was it I was speaking with St Louis approach? I had flight following. I don't know when it happened, but I changed my philosophy about flight following. Years ago, I would fly without speaking to anyone. In fact, I would plan to avoid any location that required communication. Now, however, I kind of feel alone when I don't use flight following. It doesn't cost anything, it's easy to pick up, and you have an automatic wingman. And, they smooth over any conflicts ahead. When I flew fighters, we were alone in the cockpit, but we were never alone. There is another jet. Flight following is that other jet. I recommend it.
- mm -
by Musket at 08:00