Ferried the same Commander 112 that I ferried less than a week earlier - apparently a hot market for selling airplanes.  The flight was from near Cleveland to Springfield, MO (one of the possible choices for the Simpsons' town).  When I arrived via Uber, I really thought it might be a no-go, but in the end it worked out very swimmingly. 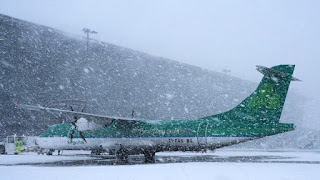 I totally missed an epic photo op when this mission started.  It was snowing like crazy with huge snow flakes...and I didn't take a picture.  The aircraft above is not the aircraft flown, but the snow was pretty close so I use it as a reference.  Sometimes I'm amazed at the pictures I DON'T take when it could be so easy (and is).  Amazingly, the skies broke and I had a window of opportunity.  After sweeping all the snow off the wings, I pressed.  I knew the weather to the west (direction of destination) was better so I launched. 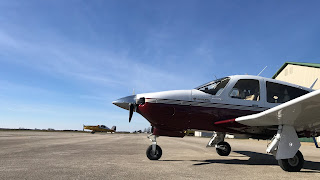 Here's the Commander 112 at Casey Municipal (1H8).  This is why FBO's are cool...you never know what to expect.  There was a gas pump but clearly no ability to use a credit card.  As I was wondering how this would work, a woman walked up to the plane and asked "top it off?".  Essentially, it was like a gas station from the Sixties - full service with a smile!  Awesome.  The pic above shows the Commander with an Air Tractor in the background.  And Air Tractor that is worse for wear. 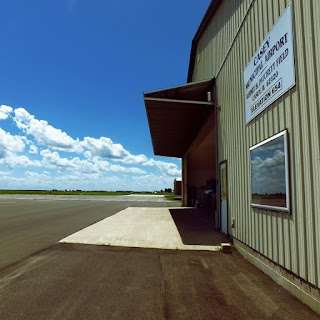 Another shot of Casey Municipal.
The final destination was KSGF (significant girl friend) or Springfield-Branson National Airport (I use all the memory aids I can).  I didn't take any pictures because the new buyer wants to me you and talk about the airplane and photos can get in the way.  Here are some stock photos... 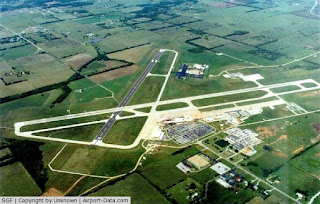 The airfield from the air. 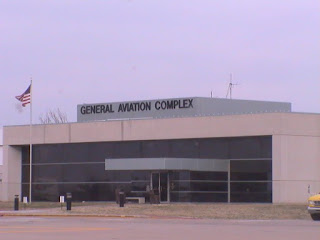 The General Aviation Complex
Very nice FBO - actually labeled "General Aviation Complex" which is one of the cooler things I've seen.   GA brings lots of business if you're ready for it and KSGF was clearly ready for it.  A super nice thing about this ferry flight was I could connect back to Denver from the destination. We took a seven minute ride around the airport and I was in-place.  Super stress-reliever.  Overall, it was a great ferry operation.  Well-compensated and easy connections.