I flew Belle a couple times before I even realized she didn't have an attitude indicator. So I sprang for an upgrade. Since I was already going down that road, I actually upgraded two instruments. There are a couple of things I'd change, but overall I was quite pleased with the finished panel. 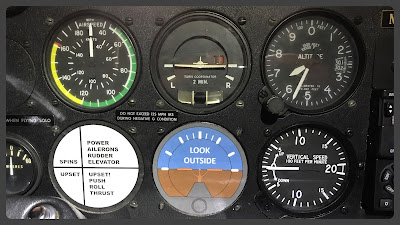 Kinda funny that Belle's predominant instrument is the turn and slip indicator (center, top).  That should be where the attitude indicator should be. In fact, this is the traditional "six pack" arrangement... 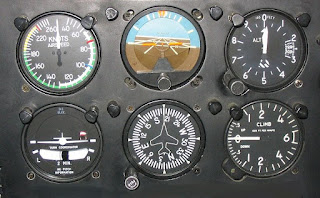 The attitude indicator and the heading indicator (below it in the traditional setup) are driven by gyros which often use a vacuum pump. Belle does not have a vacuum pump, so she knows not her attitude or her heading. She does, however, know her turn and skid/slip because that gyro is electric (and installed). Maybe even more surprising is that of the four (actual) instruments in Belle's six pack, only two are required to be legal.

The Concept: Joke, but not a Joke. First of all, I don't mind the missing instruments. But I had two black circles looking back at me. So I replaced them - with paper. The 'attitude indicator' reminds people to look outside. An attitude indicator can never compete with God's attitude indicator (the earth). The 'heading indicator' gives people a checklist of sorts for 1) recovering from unusual (or upset) attitudes and 2) recovering from a spin. Once you cross the line of an unusual attitude and enter a spin, the UPRT acronym no longer works. You can't simply push your way out of a spin. You have to stop the rotation. That can get lost in the UPRT enterprise where it's simply push, roll, thrust. A spin requires the PARE method. You should always go idle, ailerons neutral, rudder opposite of rotation and finally nose over (elevator) so you get flying airspeed.  UPRT and PARE are not the same!  Flying is great!