I enjoy ferrying aircraft or picking them up with their new owner.  My latest adventure was getting a Mooney from Terrell TX (KTRL) to Colorado Springs CO (KCOS).  We flew commercial into DFW and the new owner's dad drove us to Terrell.  They aircraft was a 1961 M20B.  The earliest I'd flow was an M20E so I was excited to see what it was all about. 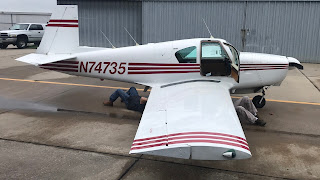 With any ferry flight (and/or purchase) there's always some admin and last-minute details.  On this particular day, the weather wasn't really cooperating so there was a bit more time for 'admin'.  I had to take this picture of the previous owner and the new owner's dad checking things out.

The only way to get out of Terrell was to file IFR and push north to better weather.  We didn't want to stay overnight as the weather was supposed to be worse.  It was good for me as I hadn't filed IFR for awhile, but not so great in an airplane you've never used.  It worked out and we saw some epic skies. 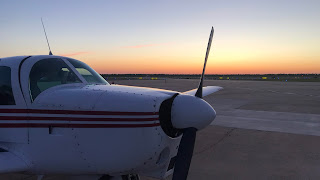 We made it.  Clear skies and perfect temperatures in Wiley Post OK (KWPA).  We used Atlantic as our FBO and they treated us very well.  The Mooney was solid and took us to OK with no problems.

Departing Wiley Post was a bit ironic.  The weather was the same as we'd left in Terrell and Terrell was VFR.  So again, we departed IFR to expected better weather.  We filed to Woodward (KWWR), entered great weather and found a cool FBO.  It's an old Army Airfield so they have the classic triangle layout but only use two sides of the triangle.  The FBO is show on the left above and the Mooney having the airport to itself is on the right.  This is why I love airports and flying.  You never know what you'll encounter. 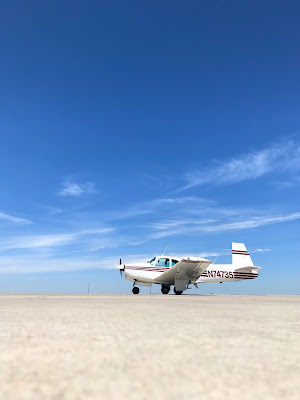 This is the same picture as earlier, but I had to show that sky.  Amazing! 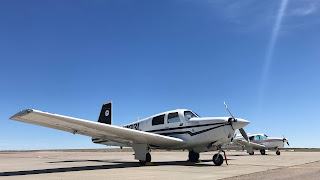 We then hopped to Liberal KS (KLBL), Lamar (KLAA) and finally to the Mooney's new home of Colorado Springs (KCOS).  We made a multiple stops so the new owner could get familiar with bringing the plane into traffic patterns while seeing different airport configurations and runway sizes.  To our amazement, we parked next to another Mooney in Lamar!  I'm going to guess an M20B has never set next to an M20C in Lamar's history.  At first we thought it was another M20B, but the back window is noticeable different.  Aside from that are essentially identical.  Like I said, you never know what you'll see at an airport/FBO.

It was a great trip and the new owner was very happy with the training he received.  Winning!