We had a Skyhawk get an engine modification and it needed 10+ hours of high-RPM operation. Normally, that's accomplished with longer cross-country flights as it keeps the RPMs high and minimizes 'slow-downs' for patterns. I finished 7548G's required hours but it was a race against the sun.  I'd rather not fly an unknown engine in the dark. In fact, my luster for flying any single-engine in the dark has waned. As I say, I like to see where I need to land. Only the last hour was in the dark, so it was okay. 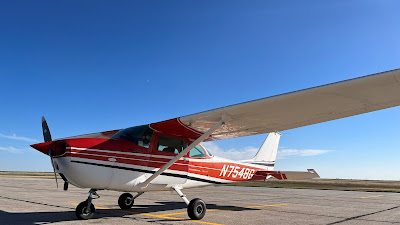 This shot is in Sidney NE (KSNY). I wish I would've zoomed out because it showed the expanse of the Great Plains. Just look between the left edge of the pic and the nose and between the tail and the right edge of the picture and it just keeps going. Note to user: Sidney does not offer self serve. You're going to pay for their use of the fuel truck.  As I'm a huge fan of self-serve, I might not return.