I first flew this Cub (16GV) in May 2021. It was the maiden flight after the second owner purchased it. Interestingly enough, I was able to ferry it to the third owner after the second owner sold it in October. I have a feeling the third owner will have it for quite some time. It's a Cub, but not a Cub - hence the "Experimental".  The first owner/builder made it as close as possible to an actual Cub, but since Piper didn't make it, it remains experimental. It flies great and gave me no problems on the trip. 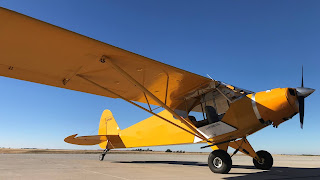 This is after getting fuel in KSYF. Note - they have not bathroom facilities on the airfield. You have to take the courtesy car to a gas station and use theirs. Likely won't return to KSYF. 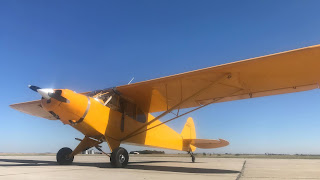 This is in Minden, Nebraska (0V3). The spacing worked out (broke the trip into thirds) but also had to stop here because it's called "Pioneer Village". That evoked a lot of memories. First, Pioneer Village is a museum of "Authentic Americana" which I visited as a small boy. It also reminded me of the Stuhr Museum of the Prairie Pioneer. This is a museum we'd visit on field trips in elementary school. I always thought it has one of the coolest buildings I've seen.

Funny enough, this was hanging in the Minden FBO.

A panoramic on Minden field. You can see the ramp is all squares of concrete. The runway was the same - very cool. I had to add the text on the second version because the pic is a good representation.

I was picked up by a friend in a Skylane 182 for the return trip. Having delivered an aircraft and returned while still in daylight, this would have been an excellent use of airpower. However, the pickup aircraft forgot all the paperwork for the Cub. That defeated the airpower a little bit.