I waited way too long to get this accomplished, but it finally happened.  By "this" I mean being legal to fly a taildragger airplane, or conventional landing gear airplanes.  And to be legal you need an endorsement saying you've been trained and that you can fly a taildragger.
A friend of mine has a friend in Texas that gives endorsements.  Once the schedules lined up, we both went to Texas.  Specifically, to T31, Aero Country airfield.  That's a great name for a Texan airfield.  We planned to fly the next day so after arriving to Love Field, drove directly to a shooting range, shot trap, an AK-47 and multiple pistols.  I was able to hit more clays than I thought I would so that made me happy.  And it was the first time I shot a .38 Special. 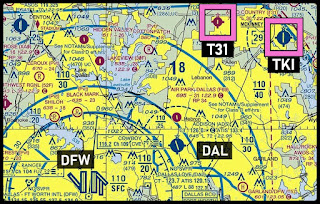 The school that had the aircraft is Four Winds Aviation.  I didn't know at the time, but they're quite renowned for tailwheel instruction.  They haven't figured out how to remove the Texas humidity, but it is a great outfit.  This is one of their shots of their fleet. 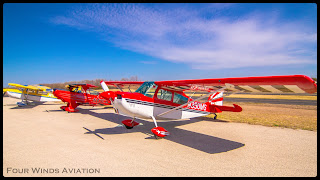 My friend flew the closest airplane in the picture, N33OMS 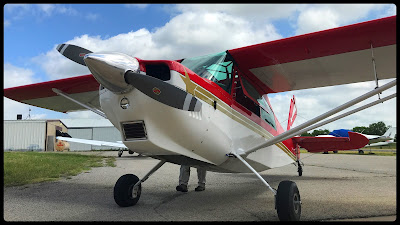 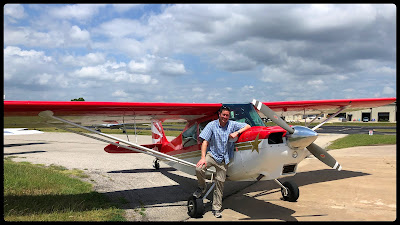 Just crawled out after three flights and 40 some landings.  You can fly some tight patterns in these birds which gives you a lot more practice.  And this was the guy I flew with... 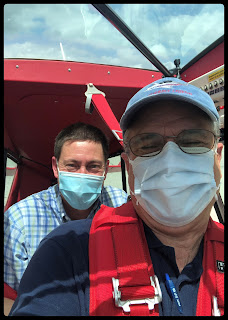 Mr René Dugas.
That picture is right after our third hop - where René suggested I fly in the back because he knew I wanted to instruct.  He knew the value of seeing the different landings and takeoffs from the rear seat.  This guy was a ENT and facial plastics doctor and built two aircraft; a Velocity and a Turbine Legend - both of which were in his hangar!  He was quite an impressive man, never talked about money, and best of all, was an absolute pleasure to fly with.  We laughed about a lot of things.  I'm laughing in this picture.  It was an epic trip and an excellent experience.  If you need an endorsement, look up Four Winds Aviation!
These are his airplanes (beyond the Super D)...