Blessed again to conduct a ferry flight.  This time it was a Rockwell Commander 112.  It was a good plane and the landing gear is super forgiving.  It's basically and Arrow but with much more room/comfort in the cabin.  The aircraft started like a dream and flew like a dream (minus one).  It's very stable but the autopilot didn't work so hand flying from state to state is a bit of a deterrent.

The folks at KTVK (Centerville) were incredibly accommodating.  They drove several hours just so I could depart earlier in the morning.  Very nice of them!  An amazing thing about general aviation (GA) is the level of trust you can develop with someone in just a few minutes.  It rivals anything you've every seen or experienced.

Point of departure - Centerville Municipal Airport (Iowa).
Not the best weather but beautiful in its own way. 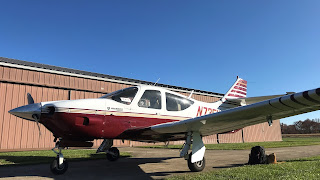 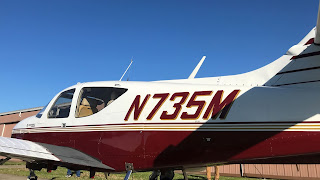 Just to show the tail number.

I failed to take a pic at Jasper County airport but the above pic conveys its sense of space and calm.  Great FBO but the only thing that is free is water.  And in reality, it was far from calm. The winds were about 20 kts.  I don't mind because you stop in about 20 feet.  And fuel was cheap - also to their benefit.

- Flying IS Great. Improve every flight -