I was fortunate enough to get another ferry job by word-of-mouth. An owner of a previous ferry aircraft hooked me up with another one. This time it was a Mooney M20F (which I hadn't flown before). I really dig the ferries with aircraft I haven't flown. It's great for overall experience. 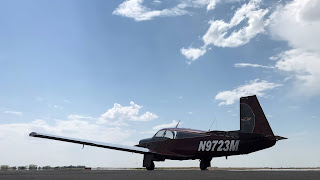 This is the M20F, N9723M. Pretty sweet paint job and flies just like a Mooney. 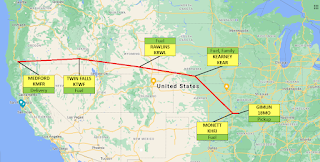 Here's the route. Pickup at 18MO (Gimlin), which is a private field with houses. That was a first. Since the day was running out, I swung up to Kearney to see the parents. It pulled the route north but not by much and I didn't want to fly very long in the dark. I've flown so much at night I would say my quota is full. Also, in a single-engine airplane, I like to see where I need to set down if I have engine issues. First stop was only 40 miles away (Monett, KHFJ) to get fuel. Everything takes longer when you're getting rained on, racing the sun, and on your first flight in a new airplane. Kearney (KEAR), is a must-do anytime it's near my route. My parents are just minutes away. Stayed the night and used almost all of Saturday to finish the flight. Third stop, Rawlins, WY (KRWL). Great FBO personality, great service, and nice (but wavy) runway. Next stop, Twin Falls, ID (KTWF). First time in Idaho and it was a great airfield. Very nice, long runway with a great FBO. Drove through a rain shower just prior witch was surprisingly rough. Final stop was the delivery - Medford (KMFR). This leg was, let's say, challenging. The smoke from the Oregon fires made the visibility horrible and there were giant TFRs to avoid. The bonus was it was incredibly rough. I by no means mind a rough ride (in fact I kind of like it), but I will admit I slowed the airplane down and looked at the airframe more than once. I.e., it was rough. 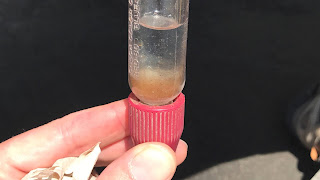 Some admin. They say, 'always sump your fuel'. I'm glad I did. The right tank of this airplane had some serious water issues. I sumped after each refueling and drained multiple vials of water. The picture above is the last sump I took and the water looked like rust. Prior sumps were clear water, but never a different color. Always sump your tanks!

How'd I get back? With amazing airpower like that shown above. So much faster than a single-engine, piston aircraft. Is it better? No, just different. They're both great.
This was a great ferry - longer than half the country and in an airframe I hadn't flown. Flying is great!