It took me a few weeks, but after getting settled in the States, I also returned to flying general aviation (GA) in my free time.  Prices have changed over the years, but I'm not a big discount hunter.  Especially when there is an airport about 10 minutes away.  That beat Colorado Springs by about 20 minutes.  That airport is Newport News/Williamsburg International Airport (KPHF), and the FBO (fixed base operator) I was able to rent with was Rick Aviation (rickaviation.com).  They have 6-7 airplanes, four of which are C-172s.  I received my flight review the middle day of September. So, biennial is every two years (not biannual) and is normally referred to as a biennial flight review (BFR), although apparently the FAA now calls is simply a flight review.  It requires at least an hour of ground instruction and an hour of flight instruction.
I flew with Mr Hampton - yes, Mr Hampton in Newport News. Nice. I took the review in N733AG, and interestingly enough, that's the only plane I've flown there. It always seems to be available. 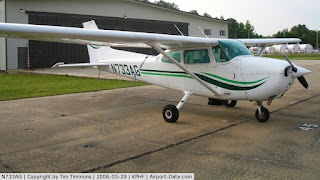 This is the airplane.  The photo above is time stamped 2006, and since it's green, I assume it's around the time Rick Aviation acquired the airplane. Below is the same plane but in the colors closer to those of Rick Aviation. Even this shot is around 2011.  You'd think I'd just take my own pic. 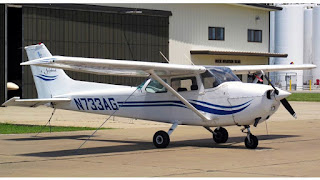