Operation BUCKEYE MINER. 10.9 hours, 1049 nautical miles. I ferried a HAWK XP from 1G1 to KFLY with stops at C56 (Bult Field) and I75 (Osceola Municipal Airport). This was a very straightforward ferry flight with no significant weather or issues on the route. The biggest issue was daylight. I departed at 15:40 due to delays in the purchase process. I would say that was that's almost eight hours later than I planned. It bought an overnight delay because of logistics. If I arrived too late at KFLY, I would be without a vehicle. Normally, that's not an issue with Uber/Lift, but with corona, that landscape has changed. Furthermore, KFLY isn't exactly in the mainstream of traffic.
The XP had autopilot (track a route but not hold altitude) so if you trimmed it out, it would almost fly itself. That was pretty nice. The airplane was N1025V.  People will tell you XPs have 210 HP. They don't. They have 195 HP Continental and a controllable propeller. In a C172, that's a pretty sweet combination. The nose is heavy but you'll cruise faster than any other C172. The XP is the "in-between" as it's more capable than a C172 but not quite a C182. Cessna made 1450 Hawk XPs.
This is the aircraft, N1025V.  I picked it up from Aero-Pro Avionics and got a lot of help from Ohio Air Craftsman. They were next door. They sold me oil and, in the end, got the airplane to start. The airplane wouldn't start (standard GA stuff) and it was likely due to insufficient voltage. In other words, the starter tried to turn, but couldn't. I learned a good lesson on this trip. The power jack (if the airplane has one) doesn't necessarily provide power to the starter. The starter solenoid kept clicking but the starter was essentially dead. After reopening the battery compartment (it's in the back on a Hawk XP) and charging the battery directly, the airplane started just fine. Ohio Air was nice enough to close the battery compartment while I ran at idle. 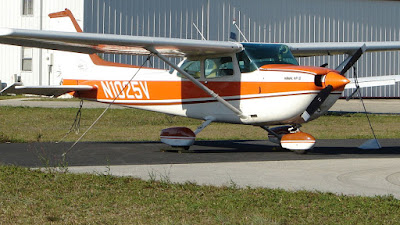 This is the routing 1G1 to KEAR, but it doesn't show the two stops. I learned that about Flight Aware. People love to track you (even if you don't know it) and Flight Aware is the go-to. What I learned is if your stop is (apparently) relatively short Flight Aware seems to connect the flight as if it were continous. Fair enough, but don't rely on it always showing the stops. 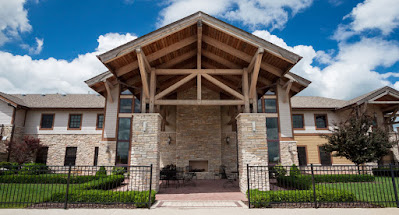 Again, another thing I love about GA. Check out this FBO (fixed base operator). It's a castle! People don't have homes like this. But it's an endearing thing about the flying world. You can compare it to the 'house' at my next stop (below) and it's clear that every stop you make is a surprise in its own way. 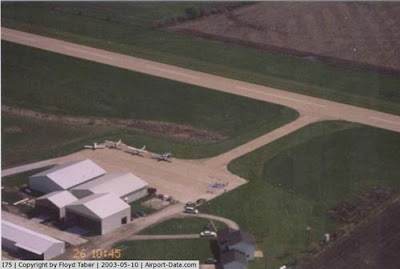 This was my next stop - Osceola Municipal. Small and quaint. More of what I expect from a small FBO (as opposed to Bult Field). The airport manager (whom I assume was the manager) was working on a kayak at the back of the FBO. I asked if there were restrooms and he said "yep, just inside". Then I asked if I was in Iowa and he said, "you're in Iowa". Love that. The 'house' had great bathrooms, water, pretzels, and cookies! Just another quintessential example of general aviation. 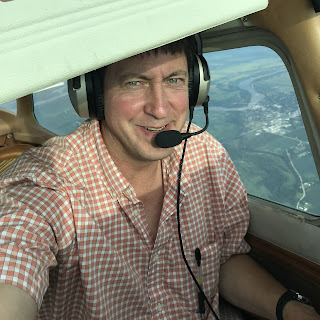 Random enroute shot. Flying Is Great! And it always makes me smile.

I stopped at Kearney NE. because my parents were close and it save the price of a hotel. The FBO I use at Kearney is Big Air, and they always treat me well. They did surprise me with one thing - the after-hours 'call out'. That'll cost you $100. Even if you call ahead it's $75. Lesson learned (re-learned) always call ahead. Remember, I only stopped because of logistics and time of day. So, the next leg was relatively short and about as simple as you can get. Funny enough, the last 100 miles were like a rodeo even though there were zero clouds.  I don't mind rough rides - smooth air is nice but 'boring' in regards to required skill. To its credit, the autopilot never let go and held on throughout. 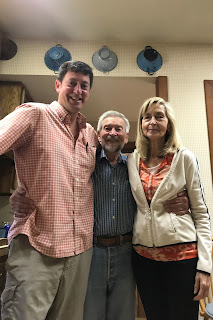 The biggest reason to use KFLY.
Landed about 30 minutes before I projected.  Mission complete.  Great adventure!
- mm -
by Musket at 11:00