I flew to Alaska and had enough time to do some exploring. Based on recommendations, I rented a bike and rode the Tony Knowles Coastal Trail. It's an eleven-mile route around parts of the international airport. If you don't return the same way, you can continue all the way around the airport. That's the option I took because I wanted to see the Lake Hood Seaplane Base. For the rental, I used Downtown Bicycle Rental (also a recommendation). They were sufficient. They'll give you a map and a quick brief for the trail if you're willing to wait.

Part of the trail is just beyond the departure end of Anchorage's airport.
Always cool to see big jets this close. 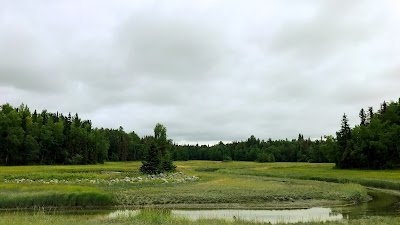 I thought this was a pretty Alaska-esque shot.

The trail had some really pretty sections. I wish I could've filmed more of it but biking one-handed isn't the easiest thing to do. If you're in the area, I would also recommend this bike ride. For the rental, Downtown works and they're close to the beginning of the trail. 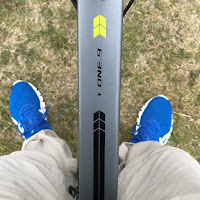 This was the bike I used. A Niner.
Finally, I was glad I stopped by Lake Hood Seaplane Base. So many cool airplanes to see - both on floats and on wheels. There is also a strip for those not on floats. Cool place.